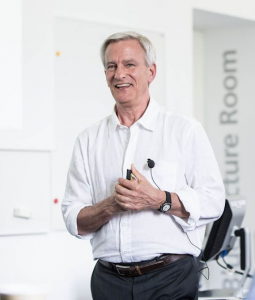 David Stark (Columbia University) talks about “Networks as Scopes: Observational Advantage Under Uncertainty” in a seminar co-organised by Behave and NASP, on Friday 12 April 2019, 2.30PM, Room A, NASP Graduate School in Social and Political Sciences, University of Milan, Via Pace 10, Milan.

David Stark is Arthur Lehman Professor of Sociology at Columbia where he directs the Center on Organizational Innovation. He is also Professor of Social Science at the University of Warwick. His book, The Sense of Dissonance: Accounts of Worth in Economic Life (Princeton University Press 2011) is an ethnographic account of how organizations and their members search for what is valuable. Stark has many publications in both Europe and the United States including articles in the American Sociological Review (1986, 1988) and the American Journal of Sociology (1996, 2001, 2006, 2010, 2015). Among other awards, he is the recipient of a Guggenheim Fellowship (2002) and an Honorary Doctorate from the Ecole normale superieure de Cachan (2013).

Stark’s current research is supported by a five-year Advanced Career Award from the European Research Council for a project on “Diversity and Performance: Networks of Cognition in Markets and Teams.” His CV, papers, and presentations are available at DavidStark (Columbia University).

Abstract.  Networks can be like pipes through which information flows, or they can be like prisms through which identities are refracted. To this pair we add a third: networks can be like scopes through which observation can be magnified or blurred. By analyzing the networks formed by producers observing their competitors, we identify the scopic properties of two network structures – dyadic and triadic closure. Dyadic closure, measuring ego’s exposure to his direct competitors in different markets, increases the ability to interpret competitors’ observed behavior. Triadic closure, measuring the extent to which ego’s competitors are exposed to each other in the markets in which ego is not present, reduces the diversity of views to which ego is exposed. We hypothesize that, in networks of observation among competitors, the higher the dyadic closure and the lower the triadic closure, the greater the performance of ego when coping with high market uncertainty.  We test our hypothesis by analyzing data on the network of competition created by securities analysts and the stocks they cover. We find that the recommendations issued by an analyst with multiple exposure (high stock coverage overlap) to disconnected competitors (competitors with low stock coverage overlap in the stocks that the focal actor does not cover) yield abnormally high returns especially when confronted by more challenging, high risk, high reward, volatile stocks.